++…ALL IS LOST, CASUALTIES PRESUMED NEAR TOTAL. ONLY KELLENPORT REMAINS. AS LORD-GOVERNOR, RECOGNISED BY THE HIGH LORDS OF TERRA, I BESEECH ALL IMPERIAL SERVANTS RECEIVING THIS MESSAGE TO COME TO OUR AID WITH ALL HASTE. MAY THE EMPEROR SHIELD US. SCANT INFORMATION EXISTS ON THE INVADING FORCE SAVE FOR A BINARIC DATA-BURST. TRANSLITERATION FOLLOWS: ‘WE ARE THE NECRONTYR. WE ARE LEGION. WE CLAIM DOMINION OF THIS WORLD… SURRENDER AND DIE.’++

++TRANSCRIPT FORWARDED TO THE BRIDGE FOR ATTENTION OF CAPTAIN SICARIUS++

Dear followers of the Imperium, when an astropathic message conveys the words “all is lost”, let it be known that in actual fact its all gone to shit…

Today, dear Readers, I am going to attempt a double review, seeing as Damnos consisted out of two separate novels. I am gonna try insert both covers and deal with them separately.

Damnos seemed a fitting name for an icy mining planet where all is frozen and forgotten, until the awakening of an eon old enemy… Fall of Damnos was my first encounter with the race known as the Necrontyr, metallic skeletons with advanced technologies. Humans discover an obsidian construct in the form of a pyramid and find out soon enough it would’ve been better to not be so greedy. The saviours of our greedy humans come in the form of the Cobalt Angels, better known as The Ultramarines (insert Glory music… “Hallelujah”but more 40K style…).

F.O.D started with a bang, seriously, by page 30 I was like “WTF?”, I was immediatly drawn in by all the explosions and war as it should be in any 40K setting, Kyme did not hold back. What he did do tho is stop the story from time to time to take a look at certain individuals within the story, which in some places slowed the pacing somewhat. It was done well and I know I got pissed of with it but I see now it had to be done. If it wasn’t for my knowledge on the Warhammer Dawn of War PC game, I would have had a lot of problems with this book, but what of the people who never heard of Warhammer and all the factions involved, Kyme kinda thought of that. This novel had a lot of characters to get to know, so far, in novels like these I have come across, there are usually a list of names and who or where they fit in, why this wasn’t done in this 604 page omnibus was beyond me.

In the end Fall of Damnos was a good read, I would give it a 4 out of 5 stars, but on Goodreads I had to wait till I finished Spear of Macragge to rate it as a whole. Fall of Damnos’ ending did fall a bit flat, I guess as a setup for the second book, so I was happy enough I got it all in a bind up. 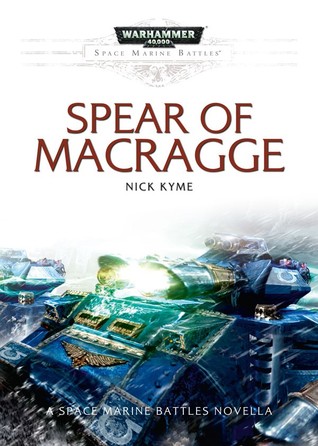 Spear of Macragge was a lot shortet than its predecessor, but where Fall of Damnos was a setup, this was the execution of all of the main sub plots. There was battle on almost every page and in some cases it was a massacre. To go into it in detail would be to ruin everything for people still interested in reading, so I will leave it at that. Things did not go down the way they were supposed to for certain people. The Necrons showed they were quite the force to be reckoned with (reckon/necron…coincidence?).

Spear of Macragge also had an ending I did not enjoy too much as it clearly felt that there was another book I still have to find to conclude this series regarding Damnos as a whole, if there is not then it truly sucked… All in all I gave Damnos 4 out of 5 on Goodreads.

Heres till our next meeting…