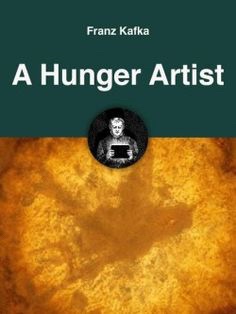 Our surprise honeymoon happened to be Prague!!! A post about that will follow sometime later with some foto’s of the Wife and I (seriously couldnt wait to finally be able to use WIFE instead of fiancee wrongly spelt every time…).

Prague was amazing. It was historical. It was one of the places on our “Bucket/ Places to visit List”. We saw many things and walked quite a few kilometers to see them. Prague also let me get some insight into a writer called Franz Kafka. I have heard of him a few times before our visit to his home town, but never realy took any notice of him (shame on me). We ended up going to a museum to get to know the man a bit better and I have to say I wanted to desperatly read a book or story he wrote as a kind of homage to both Franz and Prague.

A Hunger Artist turned out to be the last story published before Kafka’s death in 1924. The history behind it is that he wrote it earlier in life, but edited it when he was so sick that he couldn’t eat anymore. This already got my attention and became a priority on my must read list. Who else edited a book just before they died?

I don’t have a synopsis for this book/short story, as everywhere I have looked spoils the whole thing in the description, I hate that… I would rather give my own little feedback on what I read and understood about it.

A Hunger Artist was a story following a person who was part of a movement of people that went on public display, not eating for a set period of time while people would donate money towards them. The period was normaly 40 days after which a table would be set, two luck ladies would be chosen to help the artist out of his cage and he would have a whole crowd applauding his display/ commitment towards not eating for so long…

This specific hunger artist decides one day that he could do it for longer than 40 days. This ultimately leads to tragic events as the time in which it takes place sees a decline in spectators to this specific kind of artistry. There is a whole lot of deeper meanings that scholars have ascribed to this story. I will not be venturing into that as I am not wise enough to give such indepth reviews. This is a sad story. According to the way I understood it it was well translated (the original version was in German).

I will be giving this a 5 out of 5, but will not be posting it to Goodreads yet, seeing as it is only 28 pages on my i-book account… I would recommend it to those interessted in old literature As well as those that like stories with a deeper meaning.

Hope you all have a great day.