Distraction Dinsdag is a meme I created to let people know of stuff theat might take me away from my reading routine, not that I have one, but as a good excuse to show of some other things that I like to keep myself busy with.

For those not up to speed, a few weeks ago I decided to order my first Warhammer starter set. I went for a set that was both appealing to me as well as could teach me the basics of the “how to play” aspects of the game. So far it has been met with great success, success if you happen to play the Necrons, as both Milou and her brother kicked Space Marine ass in most of the scenarios. I bet you can’t guess who commanded the Space Marines… Yes that was a rhetorical sentence… Also, for those not in the know, W.I.P is an abbreviation for “work in progress”. I thought I could show of the progress from what you last saw in my Unboxing post. Bare with me as I am still in the process of learning how to take the best pictures of the miniatures, I have stepped into quite a brand new world and picking things up as I go along…

Am glad to say that non of the miniatures suffered any deformities in getting them out of their sprues. I have a problem with mini’s, but that is not because I screwed up. One Space Marine’s arm is coming of way too easily, but that is fine and can be sorted later with glue, the other problem I have is with a Necron’s face not staying in place, but it clips back on easily enough. Apart from those not so major problems, I am happy with my progress… 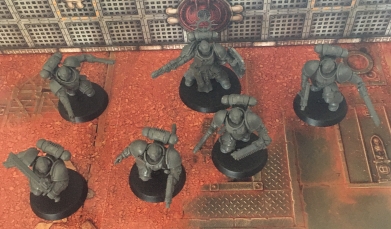 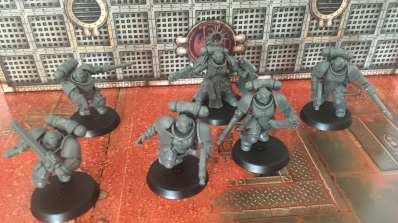 The “mighty” Space Marines. What you see before you  are four Intercessor Marines, one Intercessor Sergeant and one Primaris Lieutenant (guy with a not so visible halo above his head). All the Marines are equipped with heavy Bolt pistols and chains words. The sergeant who you see in the front middle without a sword in hand can be equipped later with a Plasma pistol as well as has a spare sword arm you can interchange as you figure out the best configuration as you go along the tutorial booklet. The Lieutenant comes equipped with a Volkite Plasma pistol and a Storm Shield, he also has a Chain Sword on his hip and I still need to figure out if he is allowed to use that or if it is just for show. As far as I can gather,, if it is on his data sheet, he can pull it out from time to time. So far I kept it standard as I am still having a bit of difficulty in figuring out what I need to roll for hits and to damage, so it will stay like that till I am comfortable with making changes. I have not glued any bits on yet as I think it is probably easier to paint individual parts before doing so. Not that I will be doing any painting any time soon. 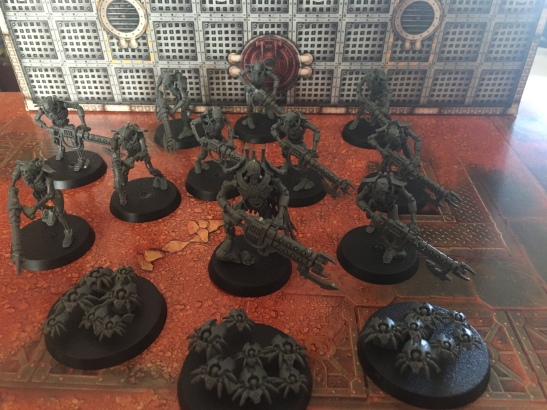 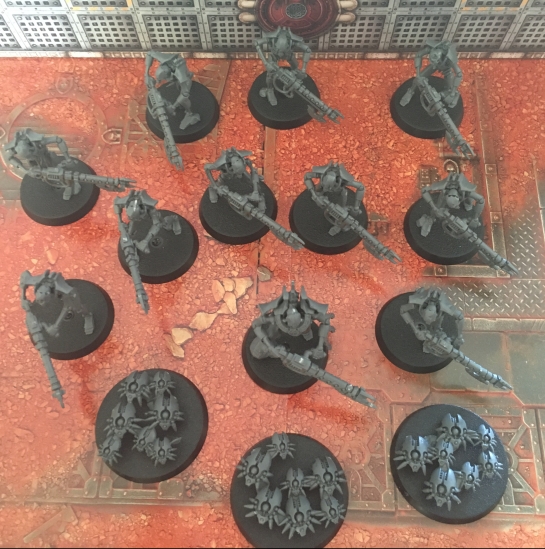 Here we have the Necrons that have caused quite a stir amongst the Space Marines. These guys are squishy, but they pack quite a punch as well as have quite long range capabilities. You can see on these two pictures: 10 Necron Warriors equipped with Gauss Flayers- they can also be interchanged with Gauss Reapers later which give them higher armor pierce but range is shortened, I will be doing configurations later as stated with the Space Marines paragraph above. At the front we have three Canoptek Scarab Swarms. These guys can be real bastards if they get close to you, which happened in most of the test plays Milou and I did. Leading the Necrons is a Royal Warden he stands just a little taller than the Necron Warriors and looks pretty cool. All the miniatures, barring the Scarab Swarm are about 2 inches tall. The Royal Warden is equipped with a Relic Gauss Blaster, a very powerful gun if its shots are hit. One thing I am going to have to get used to is dealing with inches, as I was schooled in kilometer and centimeters… Not a big issue tho. A pretty cool thing that you cant really see on these pictures is that nearly all the Necron “faces” are different. in their kits you can also decide on which one of the two heads, per model you want to go for. That is pretty awesome. 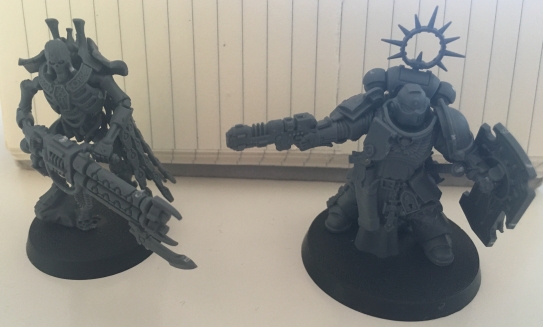 I thought I would put the two leaders side by side to give a glimpse as to all the detail that goes into these mini’s. Both the leaders have a skull of it’s enemy as part of the base it is placed on. You can see one visible on the Necron side, the Lieutenant has a skull just not visible as it is behind him. They look pretty bad ass if I do say so myself. Really glad I got this set so far. 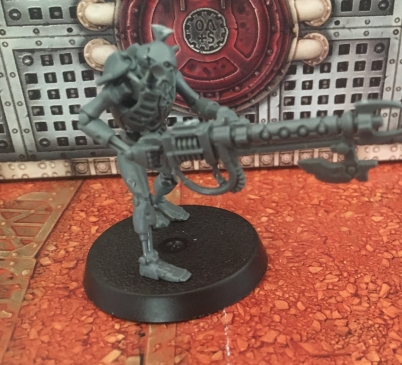 On one of the Necron Warriors I left a bit of tab on the head part as I thought I could give it even more of a personality, not that the Necrons can grow hair, but I thought a metallic Mohawk could look cool. What do you guys think?

What do you guys think in general? I would love to get to painting these guys, but sadly due to lockdown being extended to the 9th of February, being jobless since the 13th of December has not been kind to my budget. It’s going to take a while but I am exited to start on that venture once I get to it some day.

Hope you are all well.