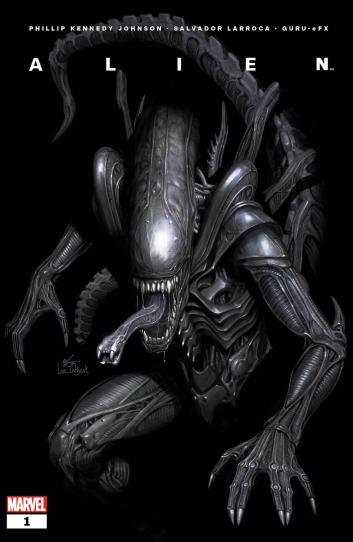 THE ICONIC CINEMATIC TERROR MAKES ITS MARVEL DEBUT! Gabriel Cruz gave his life to Weyland-Yutani–In the case of an alien attack he barely survived, almost literally! Recently retired, Cruz is trying to patch things up with his abandoned son with the help of his friend, a Bishop-model android, but his re-entry into civilian life is not going smoothly…and his encounters with the deadly Xenomorph are far from over. Phillip Kennedy Johnson and Salvador Larroca team up to tell an all-new tale of the titan of horror and science fiction that has scared audiences for decades. No one is safe. No one is innocent. And no one can hear you scream.

At 31 pages I can’t say I got a lot out of this comic. While I thought it was an oke read that starts of with some nice dream horror elements, it was over before I could get into it. Art wise it has come to my attention that the guy that did the art on this made use of some digital photoshoping and just added his own renditions to the Alien creatures. Difficult to explain, but just go check out a review on GR to see what I mean. While I am ready for more Alien, I really do not need Disney or Marvel to further fuck with the franchise that I lost hope in a while ago. While there are some good books coming out that I have already read and reviewed, I would have liked Marvel to come out swinging instead of giving it to some guy that did a half ass job. Do not get me wrong, the Alien art is great to look at but the human part of it not so much. More on this 31 page first issue I can not say more about. Check it out if you are a fan of the franchise, do so with caution like I did, you will not be too disappointed at least. I gave this a 3 out of 5 on GR. Avarage at best.

Have a good day