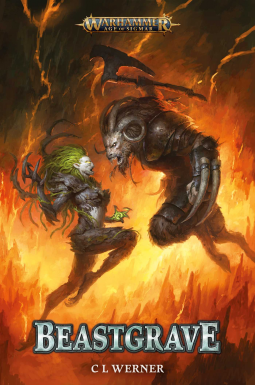 Ghur is a realm of vast wilds and savage beasts. Few are more vicious than the herdchief, Ghroth the Rootcutter. Brutal and ruthless, he leads his warherd from one massacre to the next, slaughtering all who defy him. Yet this is not enough to sate Ghroth’s bloodthirsty ambition – to become the mightiest of beastlords. When a fearsome vision promises Ghroth the power he craves, he leads a small band of warriors far across the wastes to seize the relic that will make all beastkin submit to his dominion.

But Ghroth’s ambition is not unopposed. Rivals within his own warherd seek to cheat him of the prize he covets, and in the enchanted forest of Thornwyld, an enemy of a different kind stirs. The branchwraith Kyra has also had a vision, an apocalyptic foretelling of the destruction Ghroth will unleash upon her home. Gathering a retinue of dryads, Kyra hastens to thwart Ghroth’s hunt – either by killing him or destroying the dark relic he seeks.

The trail will lead both beastkin and sylvaneth across perilous wastelands. But no danger is greater than that which waits in the mountain tomb of the godbeast. It is a place of terror and legend, a place spoken of in frightened whispers. It is a place called Beastgrave.

This book was given to me by Netgalley’s request a book function. The fact that I got to read this ARC for free in no way, shape or form influenced my views on the book. I would like to thank Netgalley for accepting my request as well as Black Library for making this a possibility on the platform.

Beastgrave has been sitting on my Netgalley shelf for ages. Recently, at work, things have started quieting down and I have been left alone in my returns department, which meant that I could put on an audiobook and not stress at being bothered too much while I got cracking at catching up with all the back logged returned goods that piled up over the season period. For the Audible part of this book the narrator did a decent job with all the characters involved. It was also over fairly quick and did not feel like a 320 page novel.

If I remember correctly, Beastgrave came out at the same time as one of Gamesworkshop’s many boardgame titles by the same name. I think this novel was a way to familiarise the players with what they could expect from the game. Like the title states, this was a novel that followed mainly non-human factions as they made their way to Beastgrave. On the one side you have the Beastkin and on the other the Sylvaneth. This being Age of Sigmar, I am not all that clued up as to how it all comes together and lucky for me, this novel did not make me feel that I needed to be. It started with a pretty decent plot and followed through to the end. Both the leaders have some sort of vision that lead them to believe they have to find Beastgrave, for there lies great power there. In the mind of the Beastkin it shows the leader ripping out the heart and becoming a menace to any who stand in his way. In the mind of the Sylvaneth it shows the same image of the Beastkin leader, but the Sylvaneth, having had a previous run in with this particular individual and his herd sees the threat and decide to prevent the leader from acquiring said power.

Each warband, if I am allowed to call them that, sets out. Each one with their own mission that comes with their own problems. The Sylvaneth have to rely on keeping to the shadows and striking just at the right time as to prevent the Beastkin leader his prize. While the Beastkin leader has problems with in-fighting among his band. Not only has he got to deal with an insubordinate up and coming chieftan wannabe, but there is also the question of his skulky half human shaman, having his own agenda. I have to say that I enjoyed the warherd’s part of the story a lot more than the Sylvaneth, just seemed there was a lot more personality. While the Sylvaneth made me think of a gender swapped Treebeard. Was not all bad, they had some magic system that I would have probably liked more explanation on, but as I have said, maybe it is divulged in another novel somewhere.

I feel that this book served it’s purpose perfectly for the boardgame I have not played yet, but it feels like it has the same mechanics as Warhammer Underworlds, which I did play a little bit of on my short visit to S.A in July. You control a small warband and Beastgrave is your objective, or your final resting place depending on the luck of your dice skills. As far as this review goes I think I have said all I need to say. I am not big on spoilers so I am happy with that. I gave this a 4 out of 5 on GoodReads and I can only recommend it to people that might be interested in the Beastgrave boardgame as well as reading some Age of Sigmar that isn’t full of the soul-jacked Stormcast Eternals.